Home / Education / Coca-Cola Mobile Book Bank Celebrates International Literacy Day
September 10, 2015: Coca-Cola Pakistan organized a creative activity on International Literacy Day to collect books no longer needed from citizens, for donation to The Citizens Foundation. For this purpose a Coca-Cola truck was converted into a Mobile Book Bank, which traveled the whole day to different points in the city, where citizens were able to donate their old textbooks and other books, in return for chilled complimentary Coca-Cola.
The activity was undertaken in association with TCF, leading higher education institution SZABIST and the Karachi Press Club. To generate greater public participation in this noble cause, several leading social media activists also gave strong support by vigorously promoting the activity on different social media platforms. 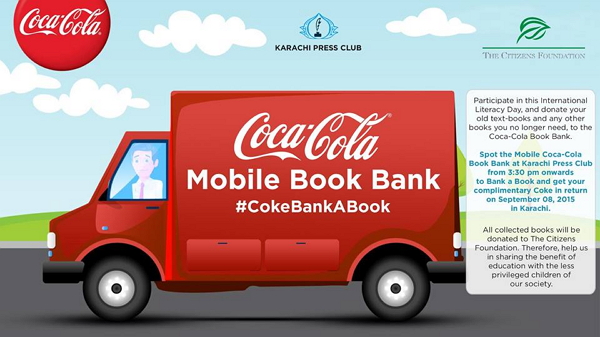 The #CokeBankABook activity was first launched earlier this year at the Karachi Literature Festival 2015, where the attending public had the chance to donate their old books to the Book Bank set up at the KLF. More than 2000 books were collected through this initiative. Books that could not be used by TCF students were disposed of in the market and the sum of Rs. 50,000 raised through the sale proceeds was also donated to TCF.
Coca-Cola’s association with TCF goes back to 2010, when the company sponsored the establishment of a brand new primary school in the flood ravaged area of Muzaffargarh. TCF School Coca-Cola Campus is a collaborative partnership that aims to provide quality education to children free of cost.  The Campus has a capacity of 180 students. Coca-Cola’s support also included meeting the operational costs of the school for the first 3 years. The Company has also been supporting education for the less privileged through the CARE Foundation and through adoption of government schools, under the Adopt-a-School programme.