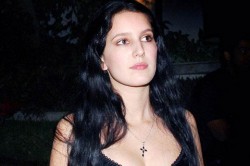 In the first ever look of Dr.Cabbie, Isabel has been seen in typical Bollywood look.

The makers of the movie tweeted on their Twitter account, “Isabel can be seen holding a typical Bollywood pose while standing next to actor Kunal Nayyar (of The Big Bang Theory fame)”.

However, the Canadian movie ‘Dr. Cabbie’ is being produced by Salman Khan’s ‘Being Human’ foundation and is currently in production in Toronto.