Beta (Daughter): Papa What are you doing?

Father: I am watching 2 privately owned teams of a $93 million sports franchise of a country where 60% are poor and earn $1 a day, and whose national debt is soon to cross $90 billion called Pakistan. 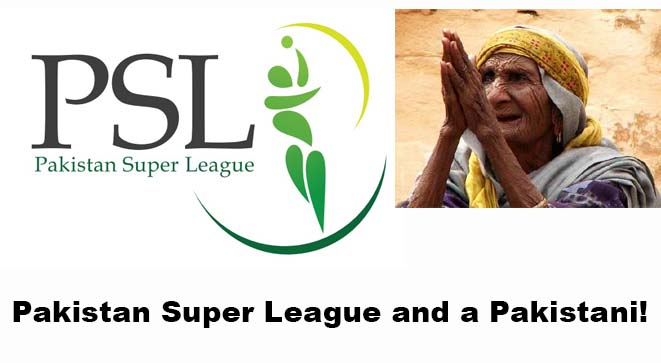 The event is called Pakistan Super League but being played in Dubai as Pakistan is too dangerous to invite foreigners to come and play with us. We have some people among us who like to kill them.

They are professional players beta who are playing against each other not because they are motivated by love of game or their state, country, nation or city. But because they get paid insane amount of money by corporations to entertain us, so these corporations can make more money. This is a business beta and this this can only work if I will watch these matches. Uncle Riaz of Bahria Town will lose money otherwise.

Karachi might be in miserable state as thousands get killed each year because of gang wars, terrorism, target killings, heat waves, poor living conditions, no law and order, broken sanitation system, violent ethnic conflicts etc. but their team is called Karachi Kings beta and we have white people in it. Real people with white skin who speak English.

Similarly, no matter how bad ethnic cleansing is going on in Quetta and Shiites and Baloch nationalists get disappeared or killed, and no matter how frequently we need to close all our educational institutions because of poor security and terrorists who come and kill students, there team has real gladiators beta.

Our politicians may have never been able to agree on any serious issue and make any real decisions in Parliament since long long time in Islamabad, but team is called united beta.

Rich people might spend millions in pompous Lahore just on weddings where a rich bride’s dress cost the amount on which a poor can run his family for an year, but their team has only pure qalandars beta.

And forget all the “zulm” that has been happening in Afghan refugees and poor Pashtuns in Peshawar because of our proxy war with India and Afghanistan, they are “Zalmi” now. Say “Zalmi” beta.

You see, we might not have electricity and gas in our homes, people may not get clean water to drink, subsidized food items to eat, healthcare to save dying children in Sind, education to enroll 13 million girls who have never seen a classroom, and justice to bring generals and politicians to accountability.

And we may also have lost 90,000 men and $120 billion in a war that was not ours to begin with, and world may say that we are most corrupt and terror promoting nation with a rotten society that stands among 3 worst, discriminating people based on gender, religion, sect, ethnicity, sexuality etc.

But we have our own super league now beta. And we should be proud of it and enjoy watching these nerve biting cricket matches.

This Story is shared by Talha Mehmood