Microsoft Surface 2 has a good combination of a laptop as well as tablet. You can prefer Microsoft surface 2 over many of the tablets available in the market because of the matchless features. Microsoft is running Windows 8, it has 10.6-inch, 1,920-by-1,080 screen with stereo speakers. Microsoft Surface 2 is a combination of 1.7GHz quad-core ARM-based Nvidia Tegra 4 processor, 2GB of memory and Flash storage which supports device to switch difference apps. 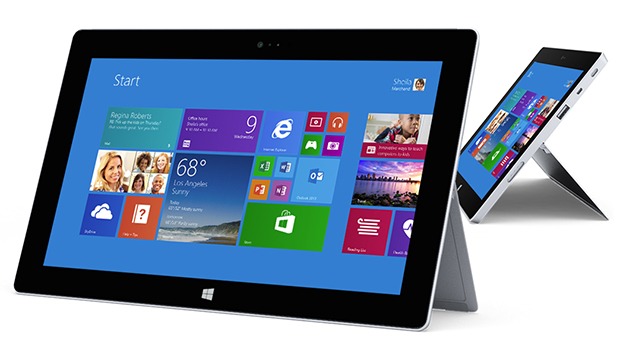 Microsoft Surface 2 has pros and cons which are mentioned below:

This model is designed to have two keyboard accessories:  one is the Touch Cover 2 (£99) and the other one is the Type Cover 2 (£109). The keyboard has been designed to clip to the bottom of the surface 2. Above all, it has the in built kickstand that will help you set the surface 2 down on your desk of working. One of the few noticeable changes to other earlier models is the presence of two steep angles on the kickstand. As a result of this, the screen can now face you when placed down on your desk. 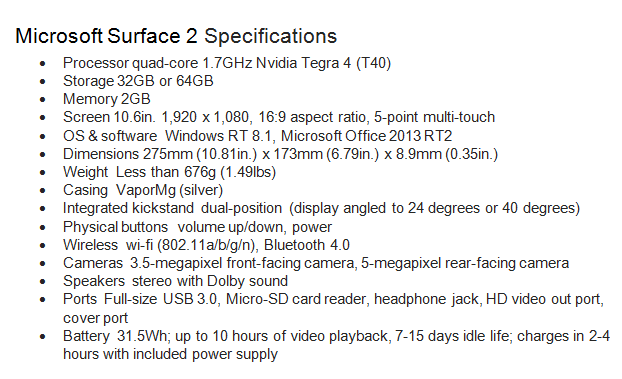 There little that has changed to the basic connectivity of the Surface 2. Currently it contains a full-sized USB port but it has changed to 3.0 ports from 2.0. Besides the addition of a 3.5mm headphone output and of a single Mini HDMI output, they have also added a microSD card slot.

Other parts that have been upgraded to the Surface 2 include: there is an inclusion of a Tegra 4 processor and the introduction of a quad-core chip clocked at 1.7GHz. The RAM remains to 2GB, although they have now improved the two cameras from two 720p resolution to a 5.0MP on the back and a 3.5MP on the front. On the part of the microphone, Microsoft has added a second one at the rear end; and this can greatly improve the quality of charting performance.